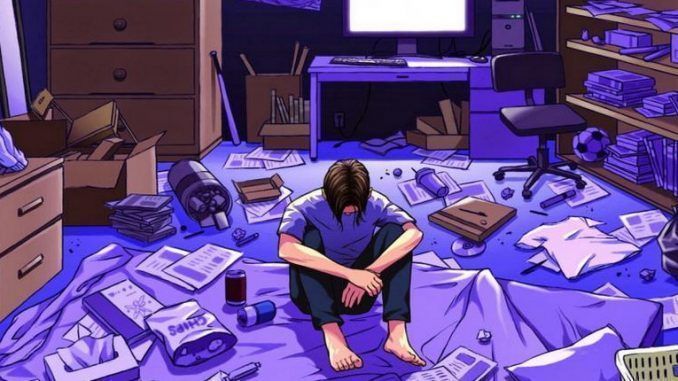 A new malaise affecting young people is coming to the attention of the news today: it is that of young people who lock themselves in their homes and stop hanging out with friends, school, and live at night dealing with video games or solitary activities. They are the hikikomori. “Hikikomori” is a Japanese term that literally means “to be aloof.”. Is used to refer to adolescents and young adults who choose to isolate themselves from society, living in the solitude of their own room. Since it affects people who are withdrawn or disinterested in interacting with others, it tends to remain invisible to the outside world and, despite its widespread occurrence, is still little known.

The voluntary self-exclusion of hikikomori, if not addressed, can last for many years and irreversibly impair the individual’s life. Since this is a new social phenomenon, families and institutions find themselves unprepared, partly because of the lack of information among staff, but mainly because of the impossibility of communicating with a boy who is refractory to contact with the outside world. It is therefore important that institutions begin to carefully consider the problem and equip themselves with the tools to deal with it.

HOW TO RECOGNIZE A HIKIKOMORI?

The onset of social withdrawal manifestations generally occurs in the period of preadolescence, adolescence or early adulthood. However, in some rare cases, it can occur even in old age. Social withdrawal can be more or less intense, starting from sporadic refusals to participate in social events, occasional school absences, to increasingly severe and totalizing forms of isolation.

The hikikomori phenomenon is different from the NEET phenomenon in that it is distinguished by progressive estrangement from society. It is a form of voluntary self-enclosure characterized by disinvestment for interpersonal relationships and a vicious cycle of progressive isolation. Among the main alarm bells we can identify: School withdrawal Disinterest in real interactions, especially with peers Reversal of sleep-wake rhythm Self-confinement in one’s bedroom Preference for solitary activities (usually related to new technologies), often including online games.

The phenomenon affects subjects of both sexes, with particular incidence on the male The hikikomori has different levels of severity and a gradual process that can lead more or less quickly to total isolation. Isolation can last for several months or several years, and generally does not resolve spontaneously.

WHY ONE BECOMES HIKIKOMORI?

A cause-and-effect relationship has not been identified. Hikikomori is the result of a series of character, social, and family concomitants. However, each case is profoundly different, and it is difficult to determine which of these three aspects affects the choice of isolation the most.

Hikikomori are in most cases very sharp, deep and introspective people with great sensitivity to life.

They have normal, if not above average, cognitive lucidity and development. They experience, however, difficulty in sustaining and reframing episodes of exclusion or derision by peers, in the face of which they develop ungovernable reactions of anxiety and panic, resulting in difficulty in establishing satisfying and rewarding social relationships.

HOW LONG DOES HIKIKOMORI LAST?

There is no time limit. Hikikomori is not a phase of existence, but a strongly internalized way of coping with and interpreting the surrounding reality. If not properly addressed, social withdrawal can potentially last a lifetime.

Here is some key information: Hikikomoris are NOT mentally ill Hikikomoris have developed a very distressing view of the effects of human relationships on their well-being, so they associate lived experiences as particularly negative with any external life practices. Their isolation does not originate from psychopathology, but from a negative view of their surroundings.

To consider hikikomori as “mentally ill” is, therefore, to trivialize an unease that has deep and complex roots. Some recent scientific research has, moreover, established the existence of “primary hikikomori,” that is, a condition of social isolation that does not result from any prior psychopathology. The government of Japan (a country where the phenomenon is much more widespread and aggressive than in Italy) has stated in an official document that “hikikomori should not be considered a disease”.

HIKIKOMORIS ARE NOT SLACKERS

The misconception that hikikomori are lazy is most common. It is what assumes that hikikomori isolate themselves so that they can avoid the drudgery of study or work and engage in playful activities. This is a completely erroneous assumption: hikikomori individuals would be perfectly capable of coping with school and work commitments if they were not discouraged by their negative experiences with social relationships and did not feel crushed by the excessive pressures of social achievement conveyed by society or relevant adults There is always a great underlying fear in having to deal with others.

Taunting, laughter, comments, or even simple glances that can make them feel judged, are a cause of great shame and discomfort. Hikikomoris have NOT had a permissive upbringing It is often assumed that the parents of the withdrawn person are unable to ensure a good upbringing for their children and do not know how to institute a pattern of clear rules that point out to the young person the proper social behavior, duties and responsibilities. Yet, the literature on the phenomenon notes that permissive upbringing is not found with regularity in those affected by the phenomenon and, more importantly, not with a greater incidence than other issues.

DO NOT PUNISH OR COERCE THEM

It is important to reiterate that the isolation of a hikikomori is never the result of a force majeure cause, but is a conscious and strongly internalized choice due to an experience of particularly negative social and relational experiences. Using a strong hand on these kids only results in further contrast and closure. Instead, one must show understanding toward them, always seeking dialogue and trying to help them improve the deeply negative view they have developed toward relationships and society.

IT IS NOT ENOUGH TO DISCONNECT THE INTERNET

Hikikomori and internet addiction are two very different conditions. The reality from which hikikomori boys escape is that of social confrontation and the associated risk of mortification and shame. Such a state of self-imposed isolation drives the hikikomori to seek refuge in the net and use it as the only means of contact with the outside world. Internet abuse, if any, is, therefore, a consequence of isolation and not a trigger.

To prevent them from using the net is to condemn them to total isolation.

The condition of voluntary social withdrawal is NOT necessarily a risk factor for suicidal propensity; rather, it may be a defense put in place by the boy to ward off thoughts of self-destruction. However, voluntary withdrawal, if prolonged and not recognized and addressed can become entrenched and lead to psychopathological consequences. For these reasons, it is important to make correct information to families, practitioners, and institutions and to recognize the phenomenon from its beginnings in order to intervene and lower the level of pressure and conflict.

A PARENTS’ ASSOCIATION TO HELP TEENS

The Hikikomori Italia Parents Association, established in June 2017 within the Hikikomori Italia project, already collects (and welcomes) today many hundreds of families throughout Italy, and has since activated several initiatives to cope with social withdrawal: It organizes free support meetings for members for parents in the presence of a psychologist, in all locations of Italy.

A great many associate cases testify to us that the kind of best-practice approach adopted by the association is achieving encouraging results in improving communication between hikikomori and parents and gradually reconnecting the boys with society. Signed and initiated with the Regional School Office and the Piedmont Region a memorandum of understanding to cope with hikikomori. Participates in a technical table wanted by MIUR to draft guidelines for secondary schools.

Ladispoli – The Council approves the motion for a law on andrology